Recently, we went to see David Rousseve‘s Stardust, a very contemporary dance performance. I don’t commonly go to these types of performances. I unconsciously ignore them, either for a lack of knowledge or just the overwhelming gamut of quality I imagine there to be (and therefore what exactly am I spending my money on?) But, Anne got a good deal and we decided on this particular event. Undramatic fate brought me to a dance performance. 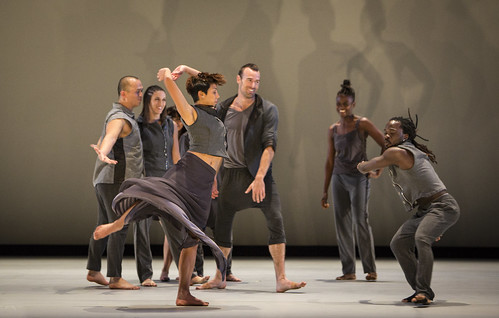 The surrounding narrative concerns our increasingly technology obsessed world and where that intersects and competes with intimacy. It was compelling and somewhat distressing in a downward spiral sort of way. The main character, who remains unseen all through, is Junior. Junior is a young black kid, living in poverty and struggling with his own homosexuality. His text messages, broken into crass low English and urban cyber-slang, tell his story as they are projected on the screen behind the dancers, accompanied by a little tweeting tone each time. He strives to understand where he stands with God to whom he sends questioning one-sided texts, confused by why He would have him suffer, why He would make him “a faggot” if that was a sin but also loving this “dope” God. He wants to find companionship in this world, to find someone who loves him unconditionally. He has that in his ailing grandfather, his only person in the world. His hopeful ventures for a reciprocated love end badly. The dancers act as Junior’s interior, interpreting his emotions through complex and beautiful dance. The musical slate that forms these emotive performances swings from highly edited contemporary hip hop (think Kanye West, Angel Haze, etc.) to slow and lovely Nat King Cole standards. At one point, “Baby Got Back” was read through deadpan.

The dancers, all professional choreographers themselves, each carved out their own specific personality with their movements, at times merging with the whole company to become a singular unit. It was difficult at times to take it all in, having only two eyes to focus on one dancer at a time. Each dancer in the wider-spanning scenes was an island of gorgeous contortions, each expressing some essential human emotion in ways that no other form can really accomplish. I settled on a few go-to dancers: the long-muscled and incredibly postured black woman; the rigidly tall handsome man; the brunette whose skirt kept spinning up into the air and falling; the squat Vietnamese guy who vogued so incredibly well.

I watched what I could and became enveloped in the wild and depressing narrative forming. At a certain point, two of the dancers screamed at the top of their lungs directly into each other’s mouths, moving into each other like mirrors and downward to the floor where they broke into laughter. Then started again. It was frightening and strongly formative of the emotion of the character. I’ve never seen a performance like it and I was reminded somewhat of John Lennon’s scream therapy. There didn’t need to be any further explanation of that emotional state. It was there, front and center. Then it left, an echo sitting in its wake. Another instance had a dancer breathing manically, as if hyperventilating, and all the while dancing wildly in circles. Anxiety, nailed perfectly, without words.

I can’t tell you everything. This should at least encourage a look for yourself, or to take a chance on things. As a whole, the show was amazing. I could dig in deep enough to start marking it up with a big red pen, but overall it needs no major editing (at least from me). The thesis was clean, the dancing gorgeous, the effect dramatic. It was personal and unafraid and concise. Go see it, if you can. Otherwise, look forward to other performances written by Rousseve.